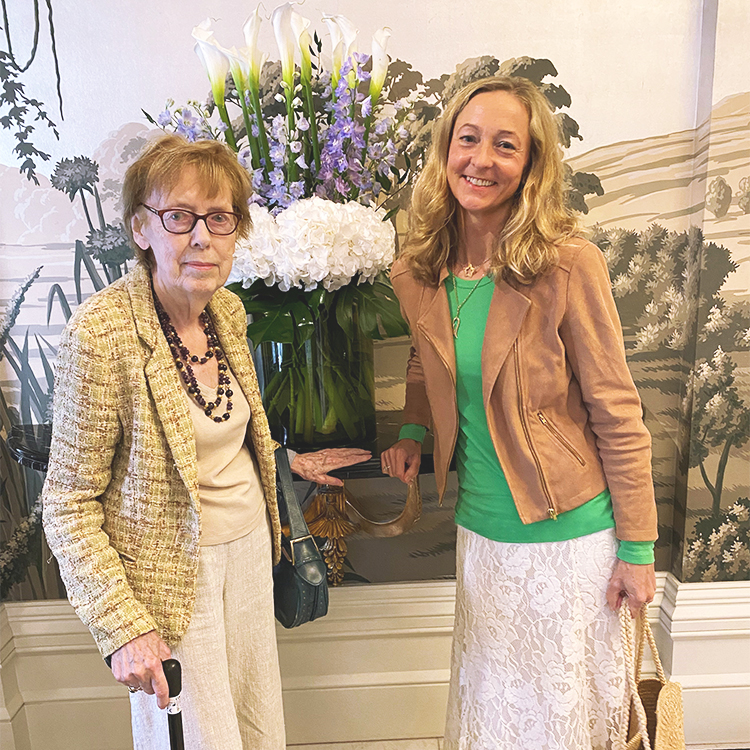 Angela and Melissa meet at the Goring Hotel, London

Recently I had the great pleasure of talking colour with the world-renowned colour psychologist Angela Wright, whose work explores the mysteries of how colour profoundly influences our moods and behaviours. Angela’s insights into the way we are affected by colour has attracted world-wide attention and has led to her advising industry on the topic – providing colour palettes for branding, packaging, interiors, product design and uniforms for a wide variety of major corporations in the UK, Europe and the US, from Lancôme and The Body Shop to Shell and BT.

After two hours chatting over a coffee at the Goring Hotel in London, Angela and I agreed that as a species our understanding of the power and influence of colour is still in its infancy. We parted using the same phrase simultaneously: ‘Let’s see where this takes us!’ and laughed as we both knew that we had a colourful journey of further discovery ahead of us… 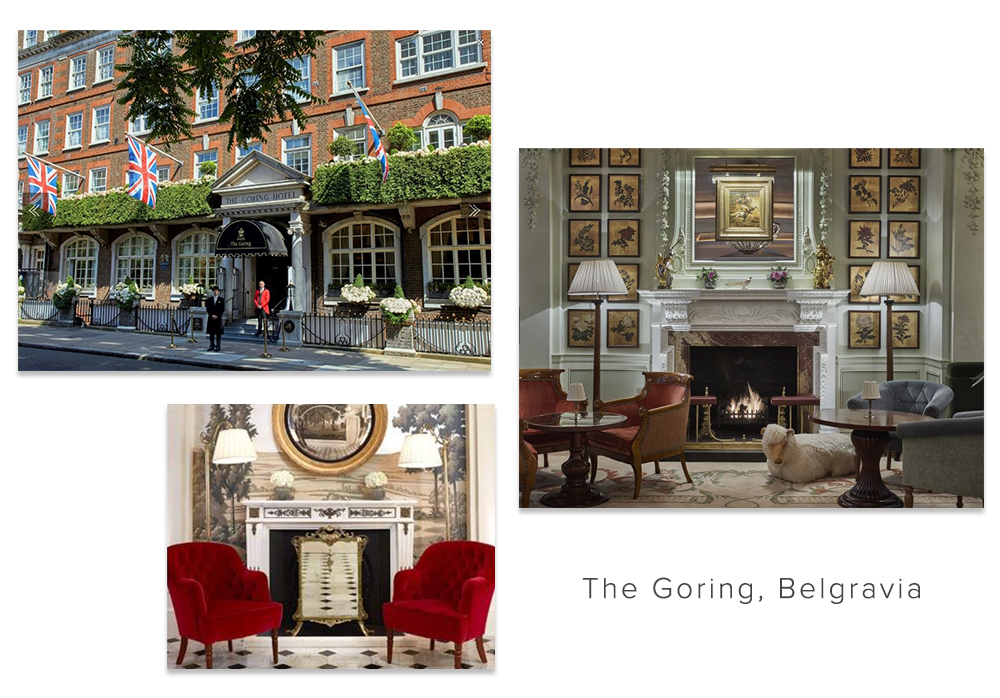 Hello Angela, so good to finally meet you! Can we start by you talking about what first sparked your interest in colour and how you came to develop your Colour Affects theory?

I was brought up in my parents’ hotel in the Lake District and was always fascinated by the colour the guests wore at parties – the men in their black tie and the women in their security blanket black frocks.

Then, as I got older, I began to get involved in the interior design of the hotel. Although architecturally all the rooms were the same, they each had different colour schemes, and we began to notice that the regular guests consistently preferred the same rooms. I remember asking guests, “Why don’t you like that bedroom?” and they would all say the same thing: “I do like it and I wouldn’t dream of criticising, but I just feel better in the other one” and we knew it had to be down to the colour.

After my parents retired and sold the business, I stayed on in the hotel world and started forming ideas about colour because I was beginning to notice the same phenomenon occurring in other hotels. But when I tried to study it I was always told the same thing: that response to colour was too random to predict and too subjective to teach, and that in any case it was all down to age, gender and culture. I didn’t believe that anything that was as fundamental to life as light, which is what colour is, could be random and that there had to be patterns. The next 40 years was a voyage of discovery, and in 1985, having explored colour around the world, I formed a theory about colour psychology and opened the colour consultancy with the sole objective of testing the theory. In 1995 I wrote the The Beginner’s Guide to Colour Psychology, which is still in circulation. 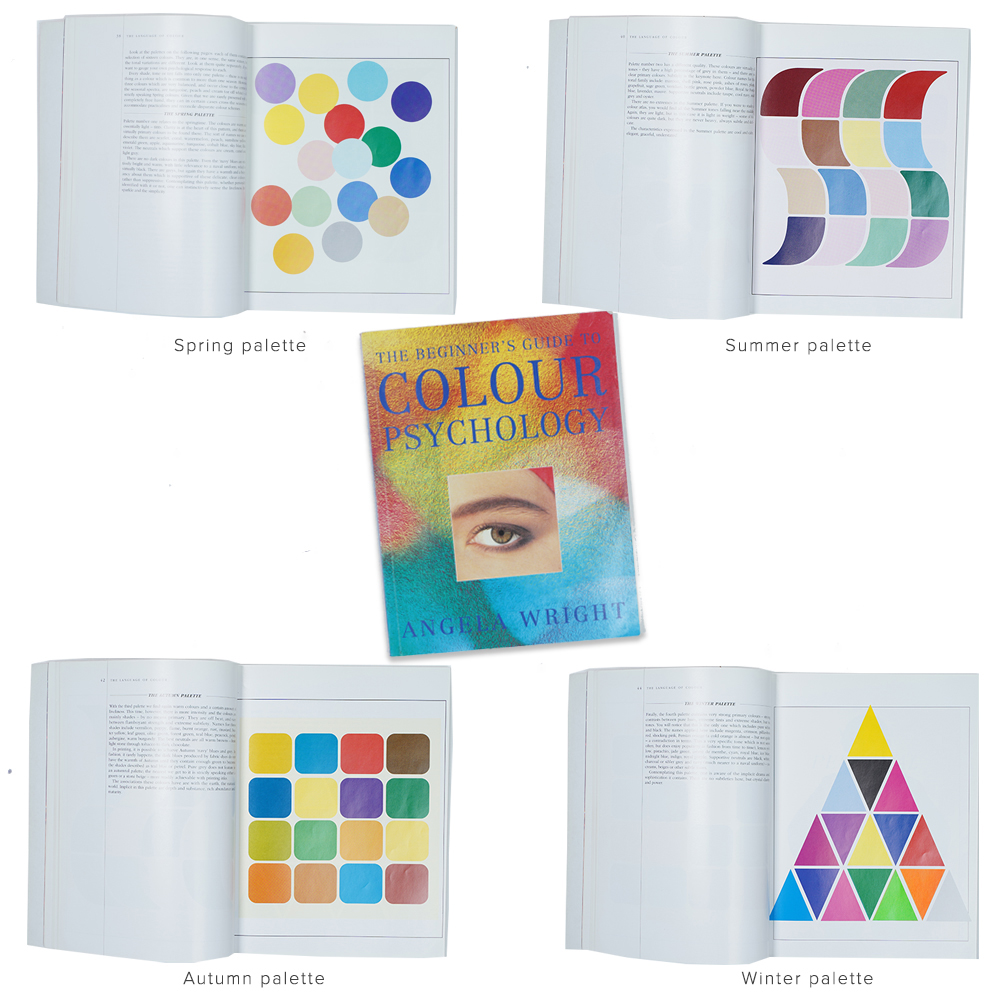 Sounds fascinating. Can you explain the basis of that theory?

The Colour Affects theory is based on the idea of links between patterns of colour and patterns of human behaviour, whereby all the colours available to us can be classified into just four colour families matched by four personality types, which I named Morninglight, Dreamlight, Firelight and Starlight. What I noticed was that each personality type had a clear affinity with one of the four colour groups, and not only did they look and feel better when they wore those colours but they were also drawn to them too.

Interestingly, one thing I wasn’t expecting to find in the course of my studies into colour was that there was a universality of agreement about which colours were harmonious. When we fed all the colours through a computer programme and analysed them we found that as long as you didn’t go outside of the colour group, the colours all harmonised mathematically. I’m not an academic but when I put my theory to an eminent psychologist, he told me I’d plumbed a psychological truth and that he would like to subject it to scientific scrutiny. It came through with flying colours, and has continued to do so to this day.

I like to consider a person as a colour themselves, and what you say about personalities and colours falling into four groups chimes with me because what we’re trying to do at Kettlewell is discover where a person sits on the spectrum and which colours harmonise with them.

Which leads me on to my next question: have you had your colours analysed seasonally?

Yes, when I first came back from my travels in the 1980s, the whole colour thing was coming into our consciousness in the UK, so I went and had it done. I am Firelight [Autumn], although originally I was told I was a Spring. One of the lessons I have learned is that it is best to consider how a person feels about that palette because it’s important not to just override your own personal preferences.

Drawing on your experience of working with hotels, are there are any colours that you think work particularly well in interiors?

Yes, we learned that too much yellow stimulates the emotions and makes it hard to get to sleep. Green and pink, however, is a very good combination for bedrooms because pink is on the red wavelength and soothing, and green is refreshing when you wake up in the morning.

We also found that red worked very well in the bar but if you had too much of it the conviviality turned to aggression, while blue did not work at all in the restaurant – and I've never seen a restaurant where it does.

When it comes to clothes, are there any colours that work particularly well in the workplace?

If you’re applying for a job, you need to marry the job to the colour. To give a few examples, green is the colour of reassurance; when the world around us has a lot of green it indicates the presence of water and, therefore, little danger of starvation – a good time to ask for a pay rise. Bright blue indicates that you know what you're doing and that you take your time to consider all options. Yellow is also the colour of creativity, so works well if you work in design.

You’ve compared colour to music in the past…

Yes, colour produces an emotional response in the same way that music does. There’s no such thing as a wrong or a right note just as there are no bad colours – the key is putting it with colours from its own harmonised colour group.

After 17 years of Kettlewell, I find myself tuning into someone’s colours on the telephone. Most people dismiss it as impossible but I’m using people’s energy and personality traits increasingly to support colour analysis. What are your thoughts on this?

I knew we were kindred spirits! Strangely enough, I have never really thought much about it until now, but now that you have articulated it I recognise that I do exactly the same – but I’ve never tried to describe it before. The biggest challenge I have, though, is trying to put all of that out of my mind until I meet the person, because there’s always a chance I could be wrong. I'm confident I haven’t been in 40 years but there’s always a first time!

The Beginner’s Guide to Colour Psychology is available at Amazon – click here. For more details about Colour Affects and the course programme, visit www.colour-affects.co.uk

If you would like to have your colours analysed, visit our Find a Colour Stylist page for a list of trained consultants in your area

So interesting thank you! I love the names she used for each palette, however I find the seasonal names so easy to identify with their respective colours, so I'm glad you use those.

What a stylish lady, as a fellow autumn I want to copy that look.

Excellent piece! I have to thank KW for encouraging me into Marine Navy and Blackberry as basics in the winter months ... As well as pops of Fuchsia, and this year Tango Red! I too noticed the colours Angela had included in Winter includes a bright citrus (in my case Lime). I bought a jacket in this a few years back and constantly get compliments when I wear it - I am a very Cool Summer. Would love to know why some of the bright citrus colours do work for Winter/Cool.

I loved finding a site that had bright plain colours but disappointed to find none of the tops fitted me. I’m a size 20 in M and S clothes. Unfortunately your tops too clingy over the tummy area. I do have a figure and can look good in the right fit I just wish you would make clothes in a relaxed style and material as I would love to buy lots of pieces in colour.

I read Angela’s excellent book year’s ago, it was inspiring! I’ve loved colour ever since. My aim is to look like an autumn leaf!

What a wondeful opportunity to listen to someone so experienced. Must buy and read her more comprehensive book. Angela spunds delightful. I had my colours and styles done in 1998, and then rerated in 2003 and 2020, and virtually the same Autumn colours in slightly different proportions. Wonderful that there was never any doubt with me!

When I was organizing our wedding by the seaside, 900 km away from where we live, the stylist I chose for my bridal bouquet insisted that we speak on the phone instead of just emailing a picture of the dress I was going to wear. She said she needed to hear me speak in order to pick the right flowers so that they matched my personality and not just the dress. Needless to say, the bouquet resonated with me in a way I had not believed possible before! It included not just flowers, but sea urchins and shells as well, which I later incorporated in a necklace I made.

Inspiring, the older I become the more important my colours influence my style and outlook. I have just ordered the book!

What a good article. A fascinating glimpse into colour psychology and Angela Wrights Colour Affects theory.

Melissa, your own insight regarding tuning into a persons own colour signature was particularly interesting.

Fascinating piece. I don’t know how I managed before finding Melissa and Kettlewell. Those blogs are great. I have been with Kettlewell from 2010 love your whole set up. Thanks

How wonderful to chat all things colour to Angela! I thoroughly enjoyed reading this blog as I have Angela’s book. The connection to my colours which I experienced at my colour analysis was so strong, so profound it quite literally changed my life forever! The power of colour is amazing!

Very interesting and informative interview, Melissa. I did notice that Angela Wright placed a bright orange in the winter palette!

Melissa, so great you could meet Angela. This is such a fascinating subject! As a Spring I find colour so much a part of my living, either in my house furnishings, clothes, plants in my garden, even my cooking. My salads are a Spring wonderland! Thank you.