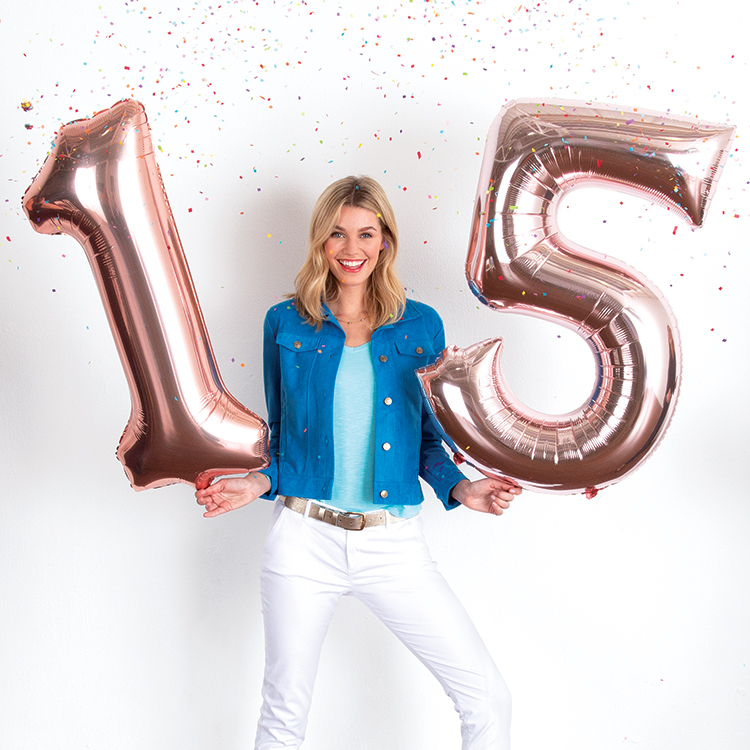 It’s been 15 years since we started unleashing rainbows on the nation’s wardrobes – and there have been plenty of colourful moments along the way. Read all about them in our special anniversary interview below...

Can you tell us about the early days when you first launched?

I remember thinking that John and I had achieved so much by the time we launched our first catalogue and website. We had produced a collection of colourful T-shirts, photographed them on friends and family, and had designed and set up the website, catalogue and systems. We were all set for the phones to start ringing and to take orders but nothing happened; they were eerily silent. It felt like we had got it horribly wrong. Even worse, we had invested our own money from the sale of our house in London, and were renting in Somerset with two young daughters and our third child on the way.

John, feeling the pressure of responsibility for the family, said he had no choice but to go out and get a job but my instinct was to learn from our mistakes and keep going. Thankfully, I managed to persuade him to stick with me as John is the backbone of the business and it would not have worked without him. 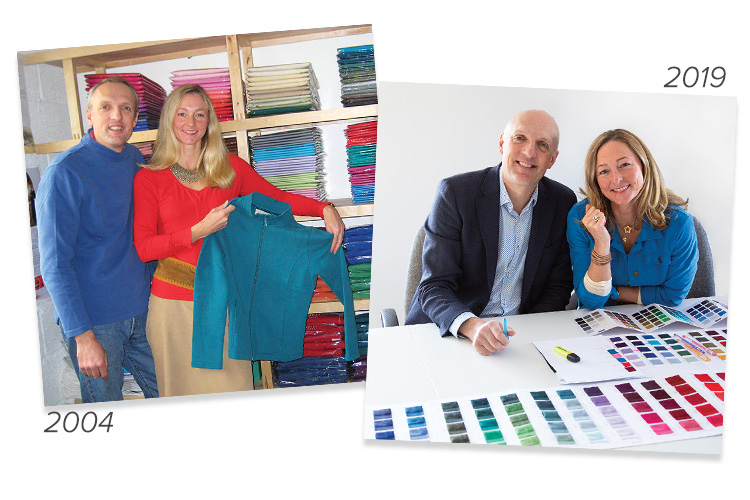 What would you say have been the biggest changes over the past 15 years?

The arrival of broadband! We used to dial up to access the internet and some days there was no connection at all. It was just the two of us then, but fortunately we had complementary skill sets. We now have an efficient team of 25. The collection has grown from a handful of plain t-shirts in 20 colours to a full range of jersey basics including prints, textures and stripes as well as dresses, skirts, trousers, jackets, knitwear, scarves, handmade leather bags and belts. And the miracle is that we offer more than 300 colours at the last count! If there’s a shade we’re missing, please let me know. 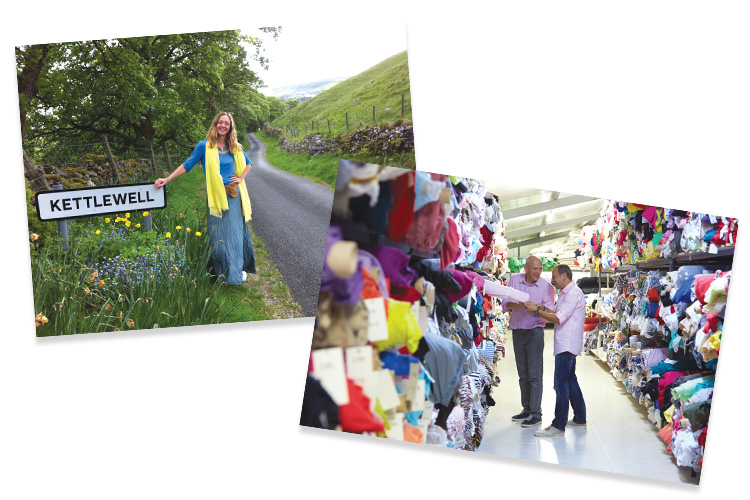 What have you learned over the past 15 years of running Kettlewell?

The meaning of the word ‘quality’. It’s something I’ve learned to achieve with experience and attention to detail. I make it my mission to continue to improve our quality every season. I’ve also learned how powerful colour is; how it affects our responses, how it makes us feel and how it can help you succeed. From a practical sense, I now know the limitations of colour too when preparing lab dips for the fabrics. Achieving colours from the Winter palette is the most challenging. Every season I lab dip more ice and jewel colours than any other in hope that the fabric will take the colour perfectly.

Additionally I feel like I’ve learned more about our customers and what they’re looking for. I’m continually discovering new things about body shapes, clothing personalities, fabric and fit and why one top is perfect for one customer and unflattering on another. That’s the reason we’ve recently launched our new Style Quiz to help direct customers to the right styles for them.

What three words sum up the brand? 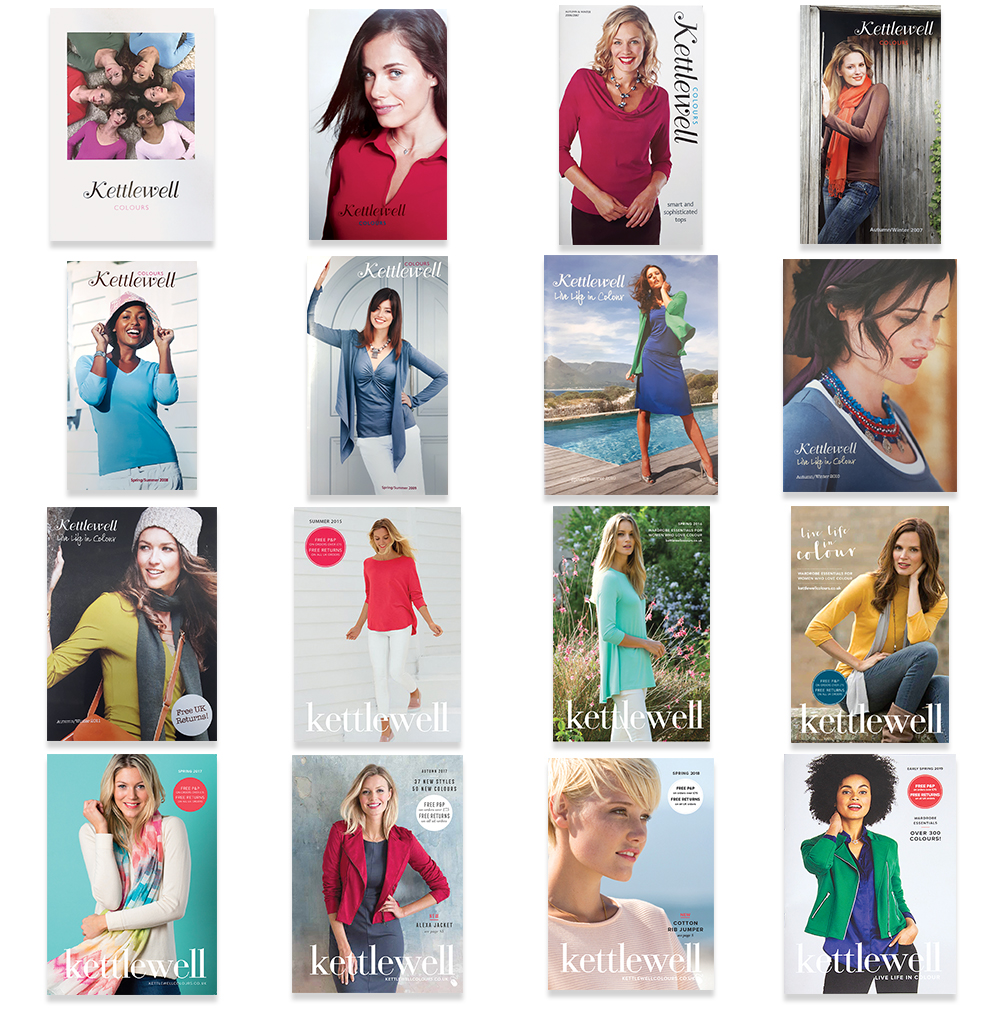 When we launched for the second time, the risk and all our efforts had finally paid off. It was also thrilling getting our first bit of PR when we were featured in YOU magazine and the orders poured in. A constant highlight is seeing the collection through from concept to production and hearing glowing feedback from customers when we’ve got it right for them.

Where do you see the brand in 15 years’ time?

We’ve just launched in the US and I’d like to see us operating in Australia, New Zealand, Canada and the UAE. I love meeting customers and helping them to look and feel good so I dream of having a physical shop one day…but that’s another story.

And finally, how are you planning to celebrate 15 years of Kettlewell?

A weekend in Rome with my gorgeous husband!

Congratulations on 15 years. I love all your beautiful colours. Any idea if you will be adding a basic men’s line? My husband is a blue spring and there’s hardly any of his colours in the shops. It would be great if he could find colours through Kettlewell like I have.

Congratulations, well done, for all your hard work and courage together. I love having your colourful emails arriving in my inbox, so cheerful.

Canada, that would be great!

I would love to be able to go to a physical shop and see the fabrics and colours in real. Can you please open one small shop in London or have a stand available in one of the superstores?

I too would love to see Kettlewell in Australia. I read your blogs all the time & am inspired by your colour combinations and outfit suggestions. Admittedly I'm yet to buy anything from you as the postage to Australia is comparatively expensive...perhaps you could offer free postage on orders over a certain amount?

Physical shop would be awesome...one in every town?!

Well done Melissa & John - what a fantastic offering you have created. And, well done for sticking to it in the beginning. You definitely offer something others don't and we love all the colours you have given the UK. Yes, now time to branch out more widely. Good luck with that, and enjoying your much deserved celebration.

A friend mentioned Kettlewell about 5 years ago and your clothes now form the main part of my wardrobe. Finding and enjoying the right colours has been a real boost and I get loads of compliments. Once you have your style sorted as well, it makes getting dressed (up) a stress-free experience.

Your passion for colour coincided with a real gap in the market and it has made many of us feel and look better. You have also kept prices realistic and worked hard on style and quality, backing this up with excellent advice. Jo's colour blogs are brilliant and so well thought out.

Good luck with the new plans but please don't sacrifice quality, style or customer service. I want to be wearing Kettlewell for ever!

I've been a Hoc consultant and kettle well customer since the start, can't believe it's 15 years! I'm still wearing tops that I bought 15 years ago and they still look fab! Great colours and quality! My wardrobe is a rainbow of fantastic colours that you can't get in shops!

Kettlewell is brilliant for my summer colouring. The range is great, when the shops seem to mainly stock whatever is on trend each season. Wishing you continued success.

I love Ketterwell and have lots of their items. I do wish they have more flowing fits for us bigger ladies and more V necks every season . My favourite item is shawl collar jackets as easy to wear. Please bring them back soon and give green jackets in that style.

Surely it cannot be fifteen years! I remember visiting you in your first warehouse, and my first ever Kettlewell rollneck - I still live in these every winter. If you ever stopped making your lovely clothes I would have to go naked!

Congratulations and thanks for the beautiful colours and great fit.

Just an additional comment....I think the time has now come to put all your lovely ethically made clothes into recyclable packaging (at least the post out packets for a start) and ditch the plastic! Don’t you....?!

Kettlewell Colours: You can read about our recyclable packaging on this page on our website:

Colours are great but LL size sells out so quickly in my colour choices that I often miss out as can't buy half a dozen garments at once. I try to spread it over a few months/wages but 3 of the items I liked have all gone already.

I'm elderly now, but have always delighted in using colour to maximum advantage. The creation of Kettlewell for me was a dream come true.

Quality, practicality, the chance to get creative and oh so much colour choice. Never again the moan, 'I can't find anything to go with my outfit.' Neither do I have to keep a much-loved garment for 'best'. It can be worn any time in the knowledge that Kettlewell will have a suitable colour replacement when necessary.

Thank you, thank you Melissa and John for creating such a wonderful company and bringing us joy. Wishing you every possible success with your expansion plans.

It amazes me how your company has developed from when I was first introduced to it via House of Colour. Only trouble, there are too many lovely items appearing!

Not sure how long I’ve been a Kettlewell fan/customer but it must be getting on for 15 years. As a ‘Winter’ I particularly appreciate your efforts in producing ice and jewel colours and you’re my go-to website as soon as I want anything. I look forward to your weekly updates and the catalogue. I’d love to visit a physical shop. Keep up your great work!

Why on earth have you stopped sending a catalogue? I’ve bought nothing since this change.

Kettlewell Colours: Apologies, I have arranged for a catalogue to be sent out to you today. :-)

Hope you will bring back the short sleeve crossover and twist neck tops as i do love the more fitted items.

All I can say say is thank goodness I found you . The quality you produce is excellent and thank you very much for a business which gives the whole package . Congratulations on 15 years.

It’s wonderful to read how you just kept going even when the phones weren’t ringing at the beginning. As a small business owner still trying to break even that gives me inspiration! Also...look how you and John look even more gorgeous 15 years on! Congratulations and here’s to many more years of colour inspiration!

Congratulations on 15 fabulous years. Wishing you continued success for the future.

One little niggle though - my bust size is 39 inches or a standard size 16 and I find size L can be too snug whereas size LL far too large. Please please introduce an extra size between L and LL. As size 16 is the most common size in the UK I feel your other customers would be delighted too.

Any thoughts of a 'petite range? skirts are too long for me at 5'3"

Have a fab time in Rome

I'd love to see Kettlewell in Australia 😄

I LOVE your website. Now I just have to develop the courage to order from Canada. Do you have style consultants to advise re best style for body shape and best size for measurements?