Colour of the month - your Sky Blue 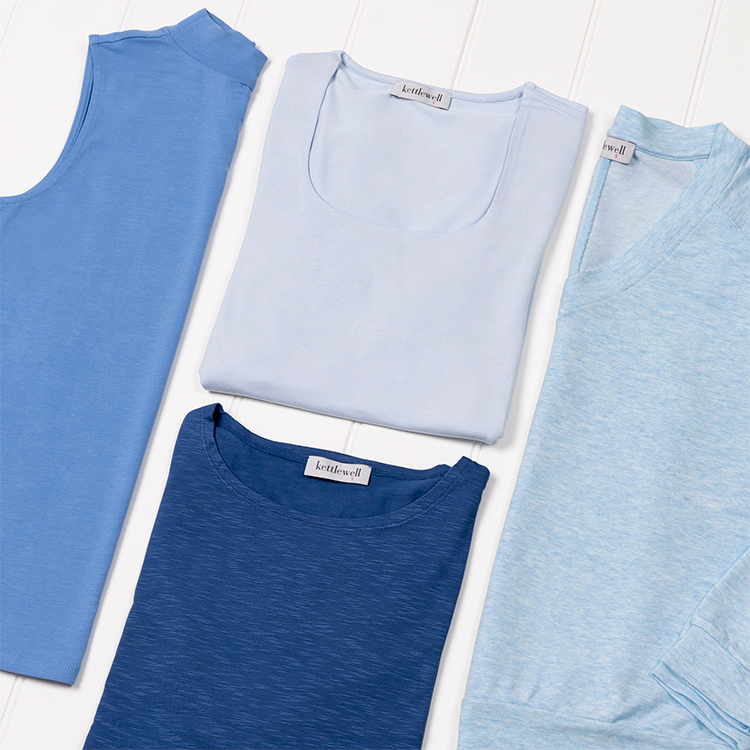 It’s May, and those first glimpses of summer are beginning to appear. The days are longer and warmer, the smell of mown grass abounds, and forgetting your coat when you go out isn’t the crisis it was two months ago.

To celebrate, this month’s colours of the month are all inspired by Sky Blue; from the palest of blues in the clear midday sun to the deeper purplish blues of the early evening sky, there’s a Summer Sky for every seasonal palette.

Sky Blue: everything you need to know

True blue is rarely present in nature, so there was little no no blue used in pre-history times, but the Ancient Egyptians were among the first to create it – they combined lapis, a semi-precious stone, with other minerals to create a blue dye. Use of indigo as a dye reaches back more or less as far, although it was rarely seen in the west until the late 15th century when trade routes to India opened up. Paler blues became fashionable in high society in the 17th and 18th centuries.

It wasn’t until the tail end of the 19th century and the invention of a synthetic (indigo) blue dye that blue as a clothing colour really took off, and fabric in every shade of blue became accessible to many. This is where we really see the growth of those sky blues in clothing. After World War II came the boom of ‘blue for boys, pink for girls’ (prior to this, pink was seen as the more masculine version for young boys, while delicate blue was often seen as more feminine). Despite the rise of more gender-neutral clothing in recent decades, this societal association persists.

In colour psychology terms, Sky Blue is seen as lightly energising, and in its palest forms can shift over towards being seen as restful and gentle. Light Blue in particular is said to promote feelings of tranquility. It is also associated with trustworthiness and reliability, as well as the connotations of youth and innocence thanks to the ongoing fashion of pale colours for children.

Which Sky Blue is right for me?

Your seasonal palette is going to be key to identifying the right Sky Blue for you, as the best versions vary so much between palettes. Why not start with our Colour Quiz, and begin your journey into your very best colours? 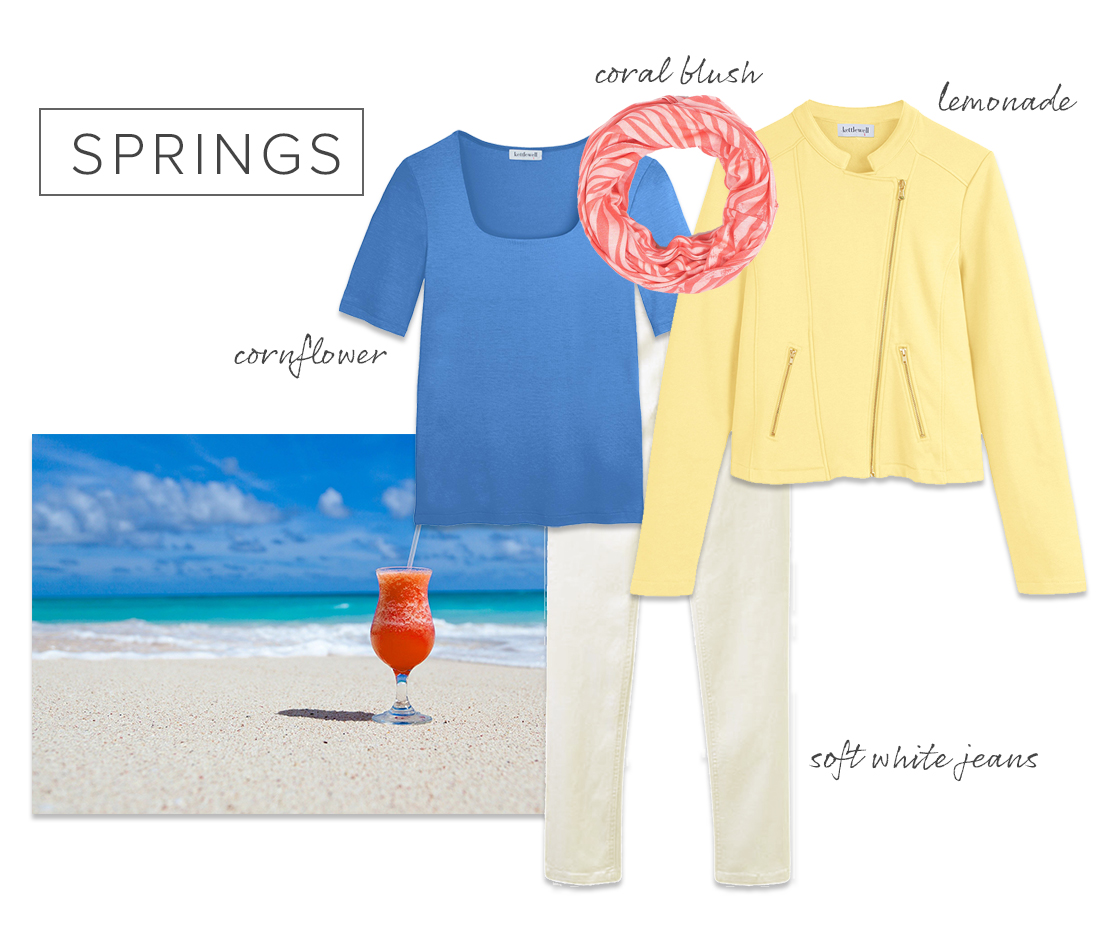 Style notes: Your best blues are clear, light and fresh, and often have a touch of warmth, giving them a slight turquoise or aqua feel, like tropical sunshine over the clearest of turquoise seas. Campanula, Aquarius and Malibu could all be used to create your Sky Blue. I’ve taken inspiration from British beach holidays for this light and bright Spring outfit, pairing Cornflower with fresh beachy Lemonade and vibrant Coral. Wearing with soft white jeans or trousers adds a neutral and keep the look anchored without feeling heavy or boring. 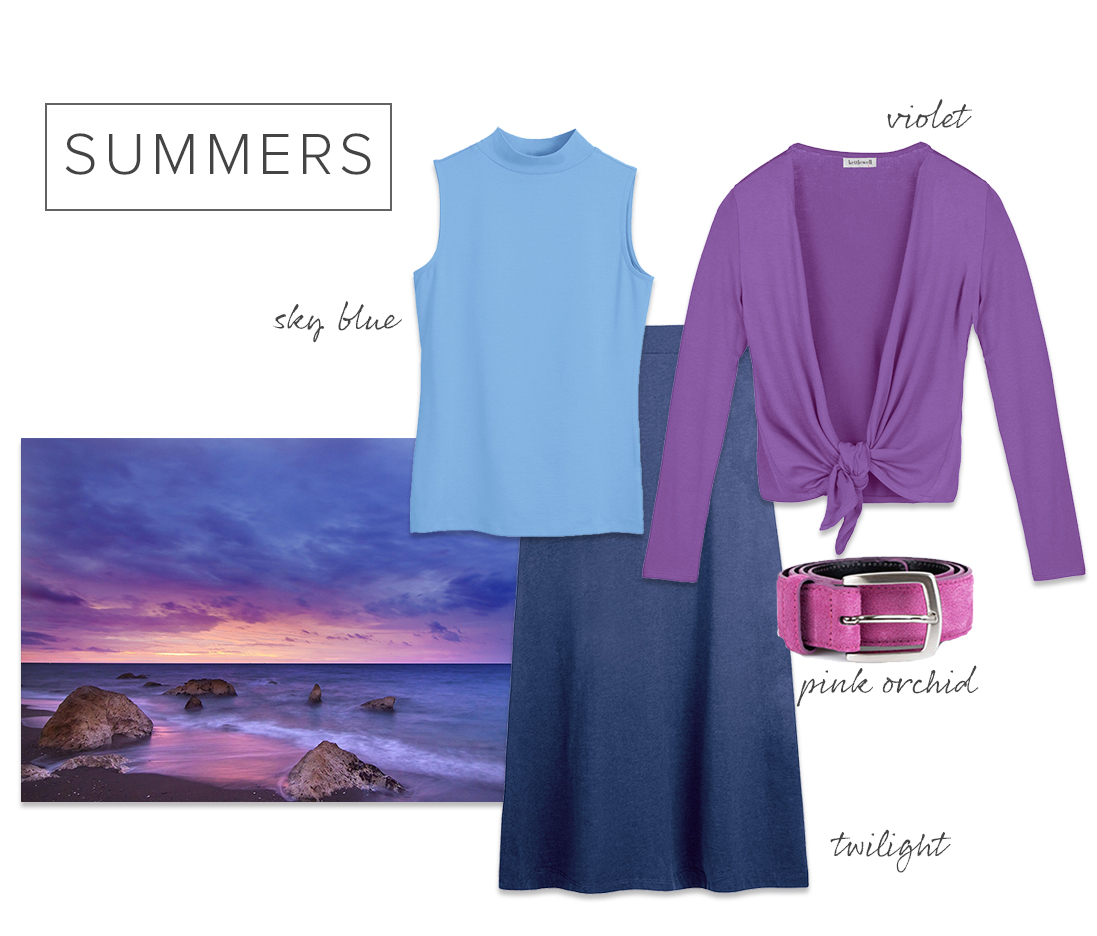 Style notes: Your Sky Blues are all inspired by the Great British Summer. Soft, gentle skies with wisps of cloud, your best Sky Blues are all slightly softened and muted, and might contain a slightly purplish hue. Cornflower, Campanula, Duck Egg, Powder Blue, Hyacinth and even deeper Heliotrope all fit the bill, but you also have the original and best Sky Blue in your palette, which was clearly made for today’s blog post! I’ve taken inspiration from the softest summer skies, late in the afternoon, for this outfit, with pinks and purples paired with the sky blue of the Mock Turtle. 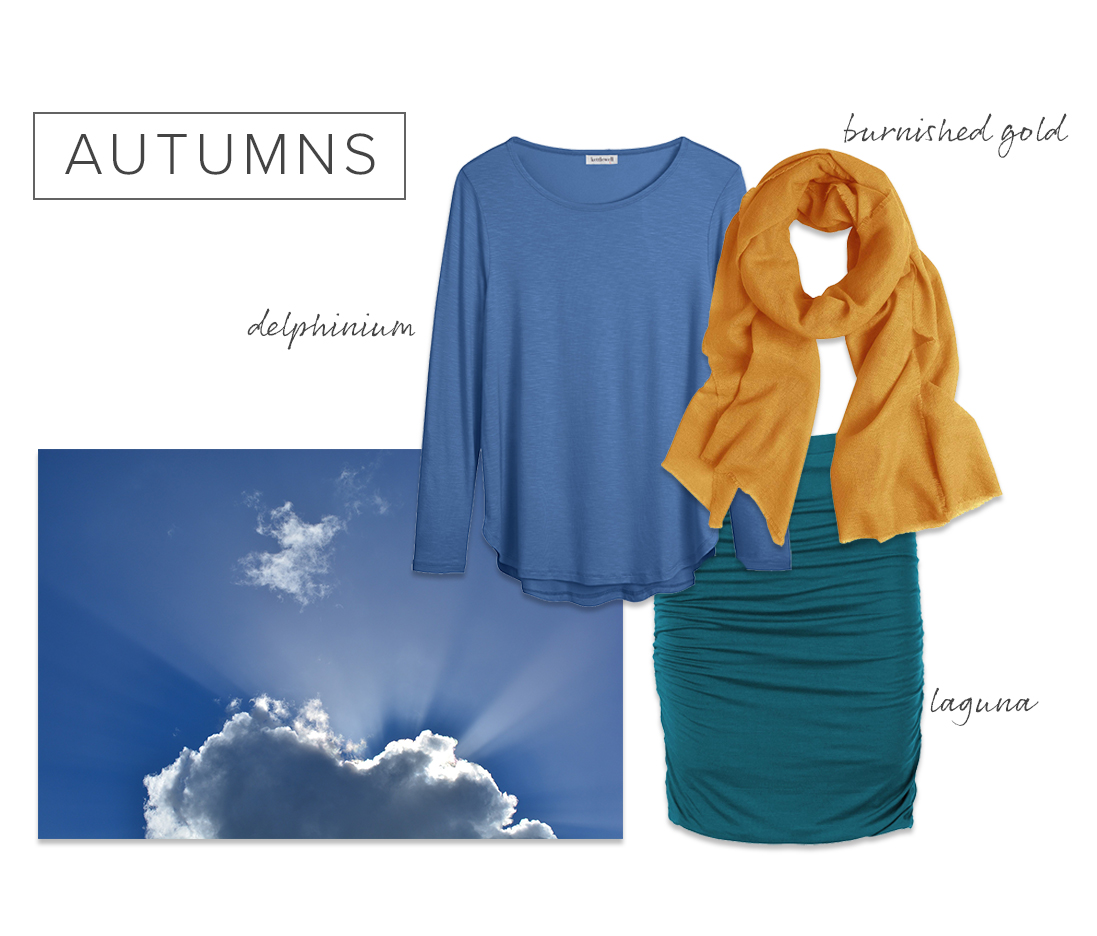 Style notes: Sky Blue is definitely not the first colour we think of when we look at the Autumn palette, so I’ve taken my inspiration from the early stages of twilight, when the setting sun fills the sky with deep purple blues, but the sun’s yellow light lends a touch of warmth. Think of streaks of vibrant sunlight cloud in a purple sky after a clear day. Heliotrope and Delphinium spring to mind, although deeper Nightshade and even turquoise toned Deep Kingfisher as the sky darkens. Although I’ve opted for a tonal skirt with the gorgeous warm blue of Delphinium, I’ve warmed up this outfit with a splash of Burnished Gold – a last dash of sunshine in the late evening sky. 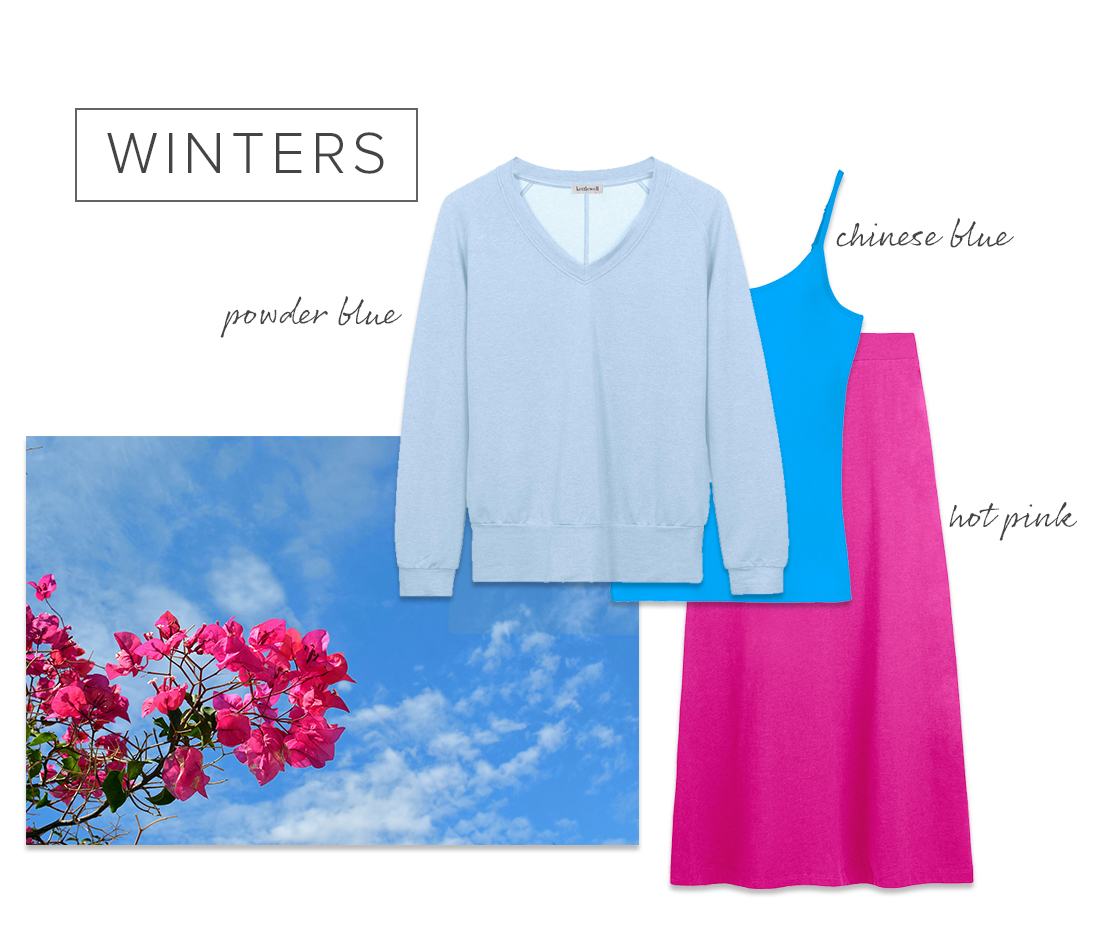 Style notes: Again, Sky Blue doesn’t feel like an obvious easy shade, but as always with Winters, we take things to extremes and suddenly they begin to work. From the lightest and clearest Ice Blue and Powder Blue – think of stark midday sunshine on an Arctic landscape during the months of endless daylight – to clear Blue Jewel for summer holiday days on the beach with a palm tree overhead and a cocktail near at hand! The best way to wear your palest Sky Blues is in high contrast, so I’ve paired clear Powder Blue with vibrantly tropical Hot Pink for a summer-ready look that will make you sparkle. A Chinese Blue Classic Camisole makes for an equally vibrant layering piece, without fighting with the blue and pink contrast.

Thank you for your interpretation of this lovely on trend colour. I have been craving pale blue.

I studied Colour Healing and sky blue is an inner child colour both tranquil and beautiful!

A return to innocence.

I am so glad I found your company! The colors are so beautiful and give each season its own customization. I would recommend your clothing to every woman who wants to go from attractive to beautiful.

I very much enjoy reading these 'Colour of the Month' features. They help me identify new pieces I need to buy from Ketllwell and they also help me think what similar-colour items I already have in my wardrobe so I can recreate similar looks.